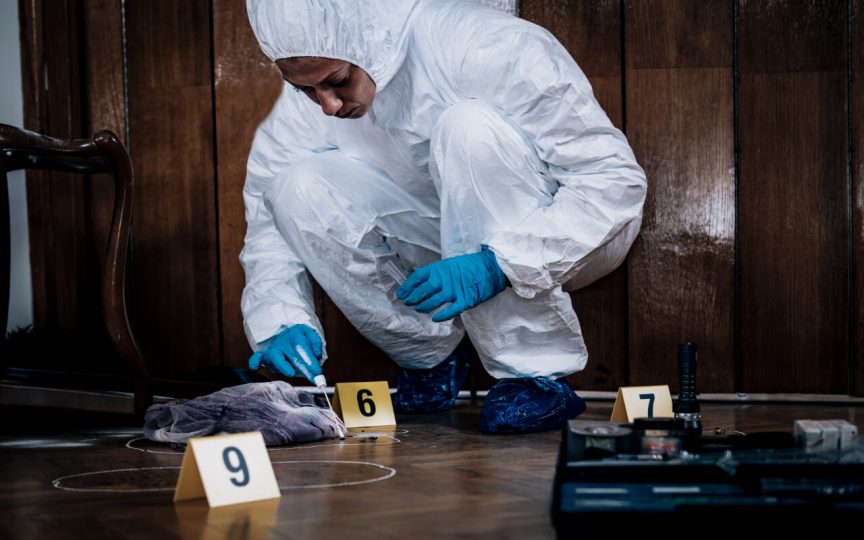 As technology infiltrates every aspect of our lives, it is no wonder that solving crimes has become almost futuristic in its advances. From retinal scanning to trace evidence chemistry, actual forensic technologies are so advanced at helping to solve crimes that they seem like something from a science fiction thriller.

With all this forensic technology, it’s no wonder that this field is one of the fastest growing in the U.S. Shows like CSI and NCIS have made most of the forensic science techniques used today common knowledge. You might think that virtually the whole gamut of forensic technology is old hat to today’s savvy viewer. In fact, there are a number of incredibly cool forensic technologies that you probably never knew existed.

1. Laser Ablation Inductively Coupled Plasma Mass Spectrometry (LA-ICP-MS) : When broken glass is involved in a crime, putting together even tiny pieces can be key to finding important clues like the direction of bullets, the force of impact or the type of weapon used in a crime. Through its highly sensitive isotopic recognition ability, the LA-ICP-MS machine breaks glass samples of almost any size down to their atomic structure. Then, forensic scientists are able to match even the smallest shard of glass found on clothing to a glass sample from a crime scene. In order to work with this type of equipment in conjunction with forensic investigation, a Bachelor’s Degree in Forensic Science is usually necessary.

2.    Alternative Light Photography : For a forensic nurse, being able to quickly ascertain how much physical damage a patient has suffered can be the difference between life and death. Although they have many tools at their disposal to help make these calls quickly and accurately, Alternative Light Photography is one of the coolest tools to help see damage even before it is visible on the skin. A camera such as the Omnichrome uses blue light and orange filters to clearly show bruising below the skin’s surface. In order to use this equipment, you would need a MSN in Forensic Nursing.

3. High-Speed Ballistics Photography : You might not think of it right away as a tool for forensic scientists, but ballistics specialists often use high-speed cameras in order to understand how bullet holes, gunshot wounds and glass shatters are created. Virtually anyone, from a crime scene investigator to a firearms examiner, can operate a high-speed camera without any additional education or training. Being able to identify and match bullet trajectories, impact marks and exit wounds must be done by someone with at least a Bachelor’s of Science in Forensic Science.

4. Video Spectral Comparator 2000 : For crime scene investigators and forensic scientists, this is one of the most valuable forensic technologies available anywhere. With this machine, scientists and investigators can look at a piece of paper and see obscured or hidden writing, determine quality of paper and origin and “lift” indented writing. It is sometimes possible to complete these analyses even after a piece of paper has been so damaged by water or fire that it looks unintelligible to the naked eye. In order to run this equipment, at least a Bachelors degree in Forensic Science or a Master’s Degree in Document Analysis is usually required.

5. Digital Surveillance For Xbox (XFT Device) : Most people don’t consider a gaming system a potential place for hiding illicit data, which is why criminals have come to use them so much. In one of the most ground-breaking forensic technologies for digital forensic specialists, the XFT is being developed to allow authorities visual access to hidden files on the Xbox hard drive. The XFT is also set up to record access sessions to be replayed in real time during court hearings. In order to be able to access and interpret this device, a Bachelor’s Degree in Computer Forensics is necessary.

6. 3D Forensic Facial Reconstruction : Although this forensic technology is not considered the most reliable, it is definitely one of the most interesting available to forensic pathologists, forensic anthropologists and forensic scientists. In this technique, 3D facial reconstruction software takes a real-life human remains and extrapolates a possible physical appearance. In order to run this type of program, you should have a Bachelor’s Degree in Forensic Science, a Master’s Degree in Forensic Anthropology or a Medical Degree with an emphasis on Forensic Examination and Pathology.

7. DNA Sequencer : Most people are familiar with the importance of DNA testing in the forensic science lab. Still, most people don’t know exactly what DNA sequencers are and how they may be used. Most forensic scientists and crime lab technicians use what’s called DNA profiling to identify criminals and victims using trace evidence like hair or skin samples. In cases where those samples are highly degraded, however, they often turn to the more powerful DNA sequencer, which allows them to analyze old bones or teeth to determine the specific ordering of a person’s DNA nucleobases, and generate a “read” or a unique DNA pattern that can help identify that person as a possible suspect or criminal.

8. Forensic Carbon-14 Dating : Carbon dating has long been used to identify the age of unknown remains for anthropological and archaeological findings. Since the amount of radiocarbon (which is calculated in a Carbon-14 dating) has increased and decreased to distinct levels over the past 50 years, it is now possible to use this technique to identify forensic remains using this same tool. The only people in the forensic science field that have ready access to Carbon-14 Dating equipment are forensic scientists, usually with a Master’s Degree in Forensic Anthropology or Forensic Archaeology.

10. Link Analysis Software for Forensic Accountants : When a forensic accountant is trying to track illicit funds through a sea of paperwork, link analysis software is an invaluable tool to help highlight strange financial activity. This software combines observations of unusual digital financial transactions, customer profiling and statistics to generate probabilities of illegal behavior. In order to accurately understand and interpret findings with this forensic technology, a Master’s Degree in Forensic Accounting is necessary.

When deciding which technologies to include on this list, a number of factors were taken into consideration.

The original article can be found here.